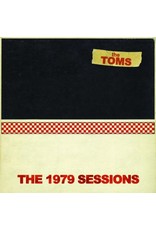 "For many years, Tommy Marolda has been a versatile member of the American music industry: a multi-instrumentalist, producer, engineer, composer, Grammy-nominated songwriter... the list goes on. But record nerds like me know Tommy because of a single weekend in 1979. He was scheduled to record demos with the Smithereens in his New Jersey home studio, but their last-minute cancelation gave Tommy a small window to record something of his own. After three days of hitting the record button and dashing back to his instruments, Tommy had more than 30 slabs of pop perfection on tape, 12 of which became his seminal power pop LP 'The Toms'. Other tracks from that weekend session have trickled out via reissues of 'The Toms' over the years, but little did anyone know Tommy recorded enough material to fill up three long players! Presented here are the last of the 1979 Toms sessions. Savor them like the rare commodities that they are."—Scott Carlson, Tomologist