Pelt: Pearls From The River LP 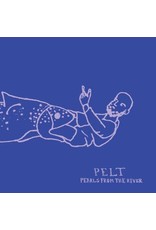 VHF presents the first time on vinyl for Pearls From The River, the all acoustic epics album from the “classic” Pelt trio lineup of Jack Rose, Mike Gangloff, and Patrick Best. Recorded in a single March 2003 session in Virginia by Mikel Dimmick, this was a superb distillation of their interests at the time (both alone and together—Rose’s first solo records, the emergence of the Black Twigs as a busy working band, etc). “Up the North Fork” is a trio for banjo, baritone banjo, and cello—after the snakey bowed introduction, the fast thwacking of the banjos and forcefully strummed cello take over and whip up a storm. The other two tracks are lengthy ragas (one in C, one in D) with the virtuoso modal guitar of Rose front and center. The title track features Rose on twelve-string, dueling with Mike Gangloff on esraj. Best’s thick, sonorous double-bass bowing anchors the duet between the lightning thrumming / plucking of Rose’s guitar and Gangloff’s arcing, sharply bowed half-time melody. “Road To Catawba” has Rose on six-string, with Gangloff moving to tamboura. Best’s bass is again the foundation, with whistling overtones rising from his bow over the low drone. Liner notes by Byron Coley.