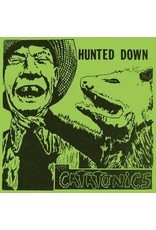 The Catatonics were Syracuse and Central New York’s first hardcore punk band. They pioneered the original 1981/1982 Syracuse hardcore scene, and their classic Hunted Down EP is considered one of the first hardcore thrash/metal crossover releases, right up there with records from COC or DRI. It remains a sought after (and pricey) collector’s item 30+ years after its release. Often compared to Jerry's Kids, SSD, Negative Approach and even Slayer, The Catatonics weren't followers or imitators, more like period contemporaries. Although the wait has been decades in the making, Southern Lord Records will soon be reissuing Hunted Down as a 12” vinyl release with bonus tracks for Record Store Day 2022!