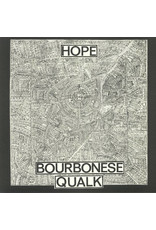 The second album to be reissued by Mannequin and Platform 23 Records of the music from Bourbonese Qualk, Hope saw the politically active musical entity expand on their mix of music, art and politics.

Staunchly independent, doing the recording and design via their Recloose Organisation label, by 1984 the group had occupied a large disused building on the Old Kent Road, becoming the base for the band's activities as well as other creative and political activism.

Recorded at the Ambulance Station, Hope is full of unceasing drum machine rhythms, electro pulses, echoing samples and lo-fi synths matched with strummed guitars and dub bass. The accompanying drones and snarled vocals go beyond any early 80's industrial tag to be something more unique, with the uncompromising, conceptual and avant flashes showing a more experimental buzz, an awkward quasi-funk noisy nuisance.

This is music as much for then and today, a radical, revolutionary cultural force that acts as a positive social charge.